Skip to content
We are revamping our documentation portal! Check out its beta version here

There are only two hard things in Computer Science: cache invalidation and naming things. -- Phil Karlton

Caching is one of the most effective ways to improve website performance. VirtoCommerce has tried a few different ways to cache application data to reduce the load on external services and database, and minimize application latency when handling API requests. In this article, we describe the technical details and the best caching practices we employ in our platform.

We chose Cache-Aside as the main pattern for all caching logic, because it is very simple and straightforward for implementation and testing.

The pattern enables applications to load data on demand: 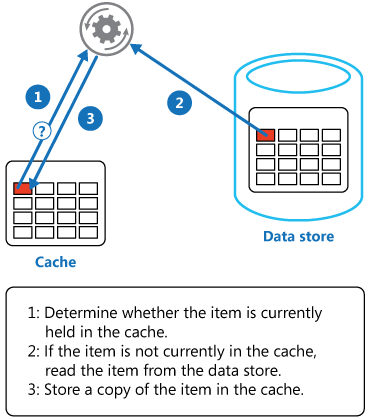 We don't use the distributed cache in the platform code, because we want to keep the platform configuration flexible and simple, and prefer to solve potential scalability problems by other means (see Scalability below).

There are three additional cons of using distributed cache that influenced our decision:

For platform cache we experimented with the IMemoryCache that stores cached data in the memory.

A simple Cache-Aside pattern implementation using IMemoryCache looks like this:

This code has a few disadvantages:

The relatively new MemoryCache methods GetOrCreate/GetOrCreateAsync also suffer from these problems, which means we can't use them as they are, too. This article describes the issue in greater detail: ASP.NET Core Memory Cache - Is the GetOrCreate method thread-safe.

To solve the aforementioned issues, we defined our own IMemoryCacheExtensions. This implementation guarantees that the cacheable delegates (cache misses) are only run once without race conditions. Also, this extension provides more compact syntax for the client code.

Let's rewrite the previous example with the new extension:

A special static class CacheKey (line 4) provides a method for unique string cache key generation according to the arguments and type/method information passed.

CacheKey can also be used to generate cache keys for complex types objects. Most of the platform types are derived from Entity or ValueObject classes, each of these types implement the ICacheKey interface that contains GetCacheKey() method which can be used for cache key generation.

In the following code, we create a cache key for a complex type object:

In line 5, the _memoryCache.GetOrCreateExclusive() method calls a thread-safe caching extension that guarantees that the cacheable delegate (cache miss) only executes once in multiple threads race.

An asynchronous version of this extension method is also available: _memoryCache.GetOrCreateExclusiveAsync().

The following code demonstrates how this exclusive access to the cacheable delegate work:

In line 7, a CancellationTokenSource object is created. It is associated with the cache data and a strongly typed cache region, which allows multiple cache entries to be evicted as a group (see ASP.NET Core Memory Cache dependencies).

We avoid manual control of the cached data lifetime in our code. The platform has a special CachingOptions object that contains the settings for Absolute or Sliding lifetimes for all cached data (see below).

Thanks to the Clean Architecture and the Bounded contexts, where each boundary controls all read/change operations for data belonging to the domain, we can always keep the cache in actual state and evict modified data from it explicitly.

The platform supports a construct called strongly typed cache regions that is used to control a set of cache keys and provides the tools to evict from cache grouped/related data to keep cache consistent. To define our own cache region, we need to derive it from CancellableCacheRegion<>. Then the ExpireRegion method can be used to remove all keys within one region:

There also is the special GlobalCacheRegion that can be used to expire all cached data of the entire application:

By default, the platform caches null values. If negative caching is the design choice, this default behavior can be changed by passing false to cacheNullValue in the GetOrCreateExclusive method, e.g.:

The default platform caching options can be changed from configuration:

Running multiple instances of the platform, all accessing the local cache that must be consistent with cache of other instances, can be tricky. How to scale out platform on Azure explains how to configure Redis service as a cache backplane to sync local caches for multiple platform instances.