Virto Commerce is the modular application that consists of divided into a set of loosely coupled functional units (named modules) that are loaded into the process of platform application.

A module encapsulates a portion of the application's overall functionality and typically represents a set of related concerns. It can include a collection of related components, such as domain features, including user interface and business logic, or pieces of application infrastructure and Rest API methods.

Modules are independent of one another but can communicate with each other in a loosely coupled fashion. Either way, it is important to keep the communication between modules to a minimum to avoid dependency issues and keep this design makes it easier for you to develop, test, deploy, and maintain your application.

You need to guide by the loosely coupled and shared-nothing infrastructure principles when designed your modules.

The following illustration shows an overall design of a Virto platform application with multiple modules. 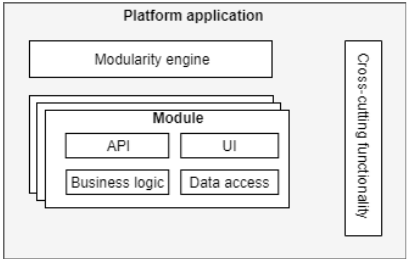 From a file system perspective, Virto module contains a structured combination of configuration and code files used to build an application from source code. The module solution structure is constructed with using of N-Tier and DDD principle and it is a business unit that is able to fully provide a set of desired features . This kind of design is called “Vertical Slices” and we group these slices in the module 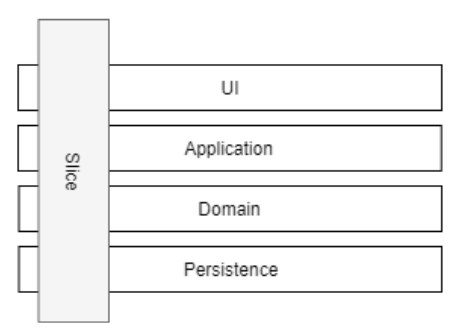 Typically, Virto module solution is organized in the following way:

Module.Core - This project contains all abstractions and domain model definitions and plays the role of program API to access all module functionality and is used in the interaction between other modules. This project has a class library project type and can be packaged and distributed as NuGet package.

Module.Data – This project consists the persistence and business layers and may include repositories and domain services implementations. This project also has a class library project type and can be packaged and distributed as NuGet package and be used as a reference from other modules.

Module.Web – is represents an application level of module domain, this project uses all services and domain types in order to implement business scenarios along with initialization and public API and user interface are implemented on this level. This project can’t be used directly from other modules and don’t distribute as NuGet package.

How the platform load modules in the application process. Module life time.

The current single policy is when the assembly with the latest version or latest date of modification always wins during copying.

Copying assemblies into probing folder prevents assembly lock issues that might happen when the same assemblies that are loaded into the application process and same time can be modified during development or other activity.

In multiinstance platform configurations only one instance checks/copies assemblies into the probing folder. This achieved by distributed locking between instances thru Redis. First started instance copies the files and the other instances skips.

Even though modules should have low coupling between each other, it is common for modules to communicate with each other and since all modules are loaded into the process of platform application, they also have access to provides by platform functionality.

A single module can have the following types of relationships with another module and platform:

Also, there are several loosely coupled communication patterns, each with their own strengths. Typically, combinations of these patterns are used to create the resulting solution. The following are some of these patterns:

Virto modules and platform use SemVer for versioning.

SemVer, short for Semantic Versioning. In its latest incarnation (v2.0.0), it describes its proposed versioning scheme as follows:

Given a version number MAJOR.MINOR.PATCH, increment the:

Additional labels for pre-release and build metadata are available as extensions to the * MAJOR.MINOR.PATCH format.

Each virto module has a version in both places the first place projects assembly version, the second is the module manifest file. The assembly version is temporary needs to be changed manually in Directory.Build.Props (in future it can automatically calculate from current Git branches and tags tanks to GitVersion utility) and second place where need to define module version is the module.manifest file.

A module can depend on other modules and cannot function without modules on which it depends, along with this, each module has a dependency to a specific platform version.

The virto dependency version resolving logic is always interpret all version as ^major.minor.path (Next Significant Release Caret Version Range operator) and it will always allow non-breaking updates. It is the best explained by example:

The assembly with the highest version or latest modified - wins

This fact may lead to an unexpected update of third-party dependencies for other modules and the platform application itself when resolving the assembly at run time. And you should always consider this fact when updating dependencies for your custom modules.

Runtime - this mode is used for update and install modules on working system or in first time setup and this process based on request to special resource file modules.json (registry_ that can be on public or internal access and it contains information about all modules and their latest major versions (minor and patch versions history not stored). Path to this file can be set by a special setting in the platform appsettings.json file.

In the real world solutions based on Virto commerce you rather will have a deal with a list of your custom modules that have dependencies to not the latest Virto modules versions, and for this better to define your own version of modules.json file that will contains list of your custom and Virto modules with specific for you solution versions. Have own modules.json file will pay the same role as package.json for NPM dependencies but have shared nature and can be used on global organization level.

How this process works for the virto platform modules for both platform major version:

Design time with using CLI – this mode is often used during development, when you manage installed versions of modules, install or update them manually on the local computer or in any other public environment. The virto provides the special CLI tool for this, check out vc-build for packages management for more info.

Virto platform has a build automation tool VirtoCommerce.GlobalTool that helps with building, packaging and releasing modules, you might read more about by this link vc-build for packages management for more info.

The goal when identifying model boundaries and size for each module isn’t to get to the most granular separation possible, although you should tend toward small module if possible. Instead, your goal should be to get to the most meaningful separation guided by your domain knowledge. The emphasis isn’t on the size, but instead on business capabilities. In addition, if there’s clear cohesion needed for a certain area of the application based on a high number of dependencies, that indicates the need for a single module, too. Cohesion is a way to identify how to break apart or group together modules. Ultimately, while you gain more knowledge about the domain, you should adapt the size of your module, iteratively.

Important: The Virto module basically represents the unit of compilation and distribution of functionality - has exactly one deployment unit. Please do not consider the module as a single possible way to the separation of domains and business logic. You might organize a well-designed multiple domains architecture within a single module!

The big quantity of modules that have many dependencies and closely coupled together might significantly affect development team productivity, deployment and maintained processes due to versions hell and cascade releases.

The implement all your custom solution in a single module will be a good choice if your project satisfied of all these requirements: 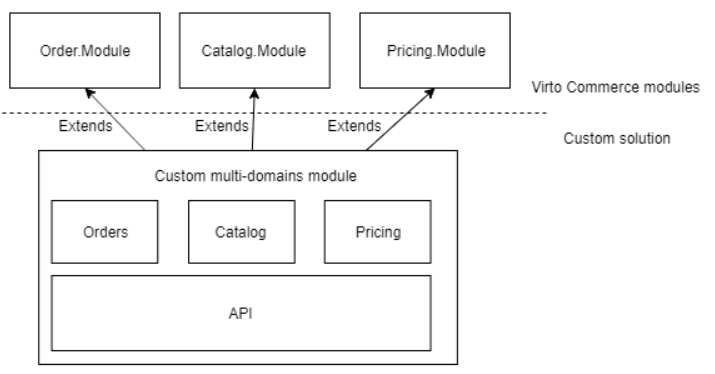 We can draw parallels between how your code can spread between virto modules and how the same code can be arranged in poly or mono repositories.

The good article explains the advantages of a mono repository without giving away the benefits of poly-repositories - https://blog.upcoding.fr/microservices-in-a-monorepo/ and another very good article for Modular Monolith architecture - https://www.kamilgrzybek.com/design/modular-monolith-primer